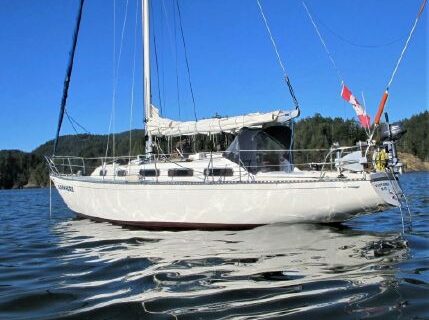 In 1967 six Toronto businessmen approached Olin Stephens of Sparkman & Stephens Yacht Design. They wanted a 37′ – 40′ boat capable of winning races in the Great Lakes and of being a fast, safe and comfortable ocean voyager. S&S was the top international naval architecture and design firm and their breakthrough 12 metre design Intrepid had just won America’s Cup.

The Hughes brothers in Toronto had recently commissioned a 37′ boat from S&S and Olin Stephens showed their preliminary design  to the six from Toronto. After some modifications they were all happy and S&S called the Hughes brothers and asked if they wanted to build 6 boats of the new design. Of course they did and the Hughes 38 came into being.

The Huges 38 is a classically designed, auxiliary 38′ fibreglass sloop capable of taking yourself and your partner or family of 4 off for a weekend, a full week of cruising sailing amongst the islands, or taking the guys out for the evening or Saturday “Round the Markers” racing on the bay.

If you looking to move up a few feet to a classy racer cruiser capable of some speed and adventures then this just may be the boat for you.