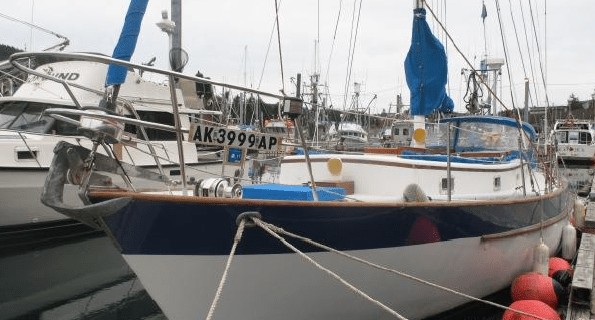 The Valiant 40 has influenced modern blue water cruise design more than any other boat and has been elected to the American Sailboat Hall of Fame. The boat’s design was considered revolutionary at that time by bringing aspects of racing design into open ocean cruising yachts which up to then meant heavy and slow traditional boats; Valiant 40s are reported to turn 160-mile (256 km) days regularly on a passage.

S.V. Starship is a great example of this classic design. With low engine hours, newer standing rigging redone this yacht is turn-key and ready for a new chapter!

The interior is entered through a scuttle on the starboard side, down (5) steps with the navigation systems, components and a distribution panel located above a desk. The U-shaped galley is to port, forward of the aft double bunk state room. Forward of the galley is the fold down table and settee with the salon bench to starboard. The enclosed head is forward of the salon to port with the forepeak V-berth just forward.

It is reported by the owners that in 2000 the hull gel-coat and outer layers FRP were removed due to extensive blistering, which is normal for this vintage vessel. It was allowed to dry out for approximately a year’s time, and renewed to industry standards and practices. The vessel was epoxy sealed and finished with Awlgrip marine paint.