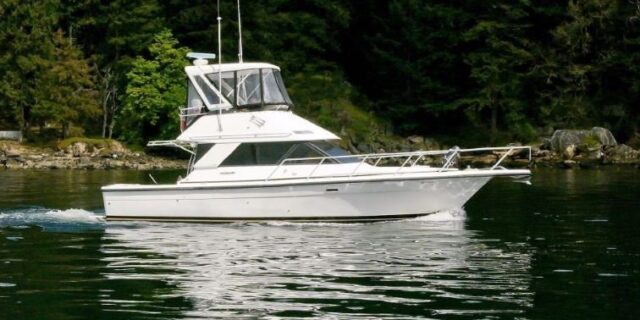 What a great boat!

A very comfortable cruiser featuring a large salon, a huge galley area, and a very large cockpit this boat is great for entertaining friends or just kicking back and watching the world go by.

Accommodation includes a large master cabin as well as a guest cabin. A couch in the salon also folds out to give a further king size bed.

Built very much like a Bertram the Phoenix boasts one of the widest beams in her class giving enhanced stability and control in all conditions as well as a classic offshore hull which rides very smoothly indeed.

The tuned 485hp Detroits really move this boat along with a 20 knot cruise making short weekend trips up the coast easily attainable.

Phoenix Marine was established in 1977 where it soon earned a reputation for innovation. The founders background was with Bertram yachts and this heavily influenced their designs for the Phoenix line. Hit by recession and luxury tax the company closed in 1994, but was resurrected about 10 years ago by former Bertram CEO Carl Herndon as the Phoenix Yacht Corporation.this venture eventually was merged with Jupiter marine also run by Herndon.

The Phoenix was designed by Jim Wynne and Fred Hudson as a fast convertible sports fisherman with sleeping for six and superb fishing accommodations.  she has an 18 degree pronounced convex section deep-V with prop pockets and an 18 inch keel.

“See Ya” was originally a Florida boat brought to the Pacific Northwest in 2008 by ship transport.  The current owners purchased her in 2015, but an expanding cadre of grand kids are forcing them to a larger craft.

Forward is the master cabin featuring a large double island bed, with hanging lockers and storage on both sides as well as large drawer at the foot of the bed. Air conditioning and sound systems are wired in, though the current owners never used the a/c.

To starboard is the private access to the large head which features a scalloped basin and toilet, and a separate stand up shower with seating and a privacy curtain.

Opposite the head is the VIP guest cabin which feature two wide bunks, hanging locker and small vanity area.

The main salon is large and bright. Forward leads down to the cabins and features some beautiful carved woodwork and a wine rack just above the companionway. To starboard there is the music entertainment system and a very comfortable couch. Behind this are multiple storage cupboards. To port there is the food preparation area which features what must be one of the longest counter tops you will ever see on just about any boat! Below this is a freezer and a brand new fridge which has never been used. There is also a large sink and three burner stove. At the back of the cabin on this side is a small recess very nice with a glass cabinet, and the electrical panel is housed in another cabinet upon which the Toshiba TV stands to face the couch.

There are two large hatches to get access to the top of each engine and another hatch with a ladder leading down to the engine room.

“Sea Ya” is obviously a very substantially built machine as can be witnessed by the heavy grade guard rails and robust fittings throughout. The electric windlass feeds out a substantial amount of 5/16″ chain attached to a Danforth tucked neatly under the bowsprit..

Generous walkarounds lead back to the vast cockpit where there is a large freezer on one side and a fish cleaning station on the other.   In the center of the cockpit is a live bait well as well as two fish boxes on either side. There is a large hatch allowing access to the Kohler generator which has ~2390 hours on it. There are also two access hatches to the exhaust and steering systems and another giving access to the back of the twin Detroits.

The owners have used this yacht primarily as a comfortable cruiser to explore and enjoy the BC waters as opposed to fishing on it. However at its core this boat is a true blue ocean fishing machine.

Aloft is the helm which has fully enclosing canvas. From the two helm seats vision is excellent in all directions and just ahead is wide cushioned couch for guests to enjoy the ride. Around the helm are several generations of navigation equipment which are used as back up for the more modern variants.