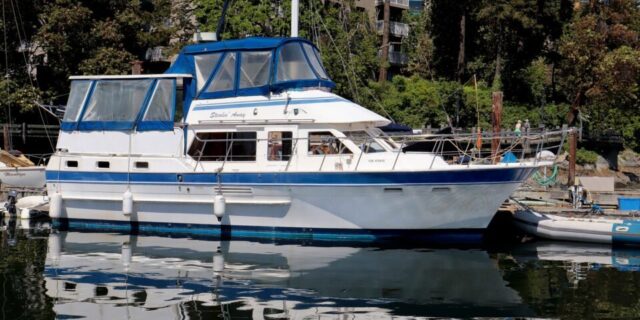 Stealin’ Away is a 40’ tri-cabin trawler yacht, production built of moulded glass reinforced plastic (GRP) by Kha Shing Yachts Inc. in 1984, and currently powered by twin six cylinderturbo charged diesel engines through reversing gears to conventional propellers. The hull hasflared bows, chines, modified V underbody and transom stern. The layout consists of forepeakcabin containing chain locker, angled double berth, lavatory and toilet compartment withshower, next up steps the main cabin containing door casements to side decks, starboard sidehelm and engine controls, galley, port side storage, moveable furniture and surmounted bycanvas enclosed bridge deck with second helm and engine controls; next down the aft cabinwith centre-line queen-size berth, storage and enclosed toilet compartment with tub/shower.Access to the machinery spaces through the hatches in the main cabin sole and fore and aft
bulkhead doors. Currently on its third owner, who uses it as a live aboard and local summercruiser. Previous owner used it for weekend cruising and entertaining, and original owner wasan avid cruiser, taking it all the way to Alaska.

The Kha Shing 40 is a heavy vessel with moderate freeboard and 3/4 keel. The interior has much more usable space. One could even say that with the abundant amount of solid teak in the interior and superb craftsmanship of the build she is worth twice the ask if not more. Have you priced teak lately? The only issue to consider is the black iron fuel tanks which which require inspection