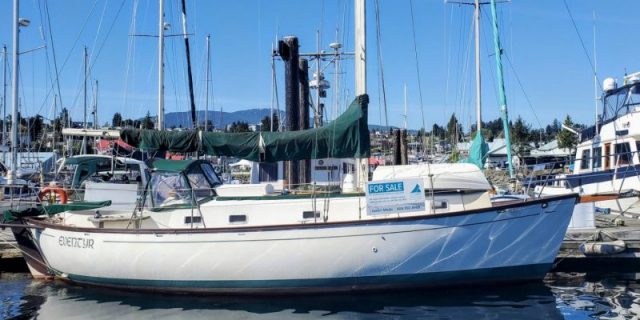 New engine with less than 50 hours!

Produced out of North Vancouver this Noon Ocean True North 34 offers an impressive interior space for a 34-foot sailing yacht. Perfect for a single-hander or a cruising couple, with spacious living space, and plenty of room for personal gear, provisions, spares, and tools.

Stan Huntingford originally came up with this design in 1949 as the Trade Winds Cutter. Windship Marine in North Vancouver used the design to produce the Noon Ocean 34 starting around 1974 with many laid up around 1976 and finished later. The company later moved to Taiwan and renamed the design True North 34.

Eventyr is a classic yacht – fantastic handling for more novice sailors, and a seasoned sailors will appreciate the traditional, straight forward sailing options of a cutter rig. The Noon Ocean 34 is impressive at her dock, and inspires confidence on board whether sailing locally or globally.

Eventyr is now offered for sale by her third owner

justin@calibreyachts.com
Next
back to Sailboats