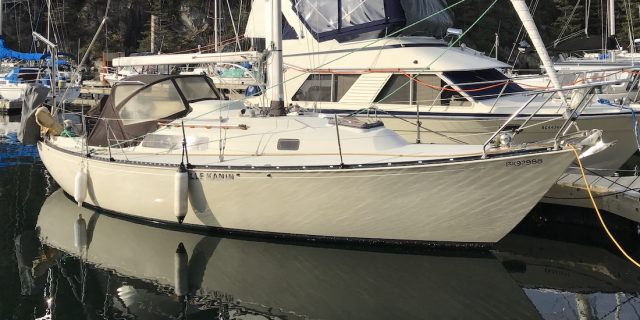 With over 800 built, the C&C 30 Mk1 is, arguably, one of Canada’s most successful racer/cruisers. Production began in 1973 and ceased in 1985 — a 12-year period that represents the longest production run of any single design version in the history of C&C Yachts.

The 30 is generally described as an all round, user-friendly boat, forgiving, comfortable and easy to handle, with a reputation as one of the stiffest C&C ever built. Given these qualities, the 30 is the consummate cruiser. It is probably for this reason that it did not receive the design scrutiny of many of its siblings; it was ideally suited for its design requirement – cruising.

The most distinguishing feature of the 30 MK1 are the two dorade boxes that appear on either side of the mast, built into the coach roof. Their primary purpose is air ventilation for the cabin interior; secondary functions are stiffening the cabin top and providing flat surfaces for the halyard winches. The second, more subtle distinguishing feature is the distance between the two lights or windows. A larger and smaller window exists on either side of the cabin top of each boat. The mast of the 30 mounts through the coach roof and steps atop the keel.

The foredeck is clean and unobstructed with the mast set well back to produce a relatively large foretriangle, typical of the traditional masthead sloop. The coach roof rises gently with a low angle from the high, cambered deck, reflecting the gracefulness of her lines. The side decks are of generous width, sloping continuously down from the bow, narrowing at the cockpit coamings, aft of the primary winches. The coach roof is relatively broad with a hatch in front of the mast and teak handrails on either side.

The cockpit area is generous in size; the cockpit seats are long, wide and straight, almost reaching the transom. Originally designed for tiller steering, wheel steering quickly became an option and, in the later years, was standard equipment. Again, as in the case of the 27, those boats sporting a wheel require the helmsman to step up on the cockpit seat in order to get to the helm.

The boat’s generous beam accommodates a very comfortable cabin with standing headroom. Vee-berths up front with storage shelves over either side. Just aft of the V berths is a head and vanity to port and a large hanging locker with shelves to starboard. A large dinette to port and a settee berth to starboard make up the main cabin. This area is separated from the companionway by the galley which consists of an icebox and counter space to port and a stove and sink to starboard. The teak companionway steps are removable for access to the engine compartment. ( Canadian Yachting)